Fourth International Conference of the Political Sphere Institute (15-16, May 2015, Minsk) 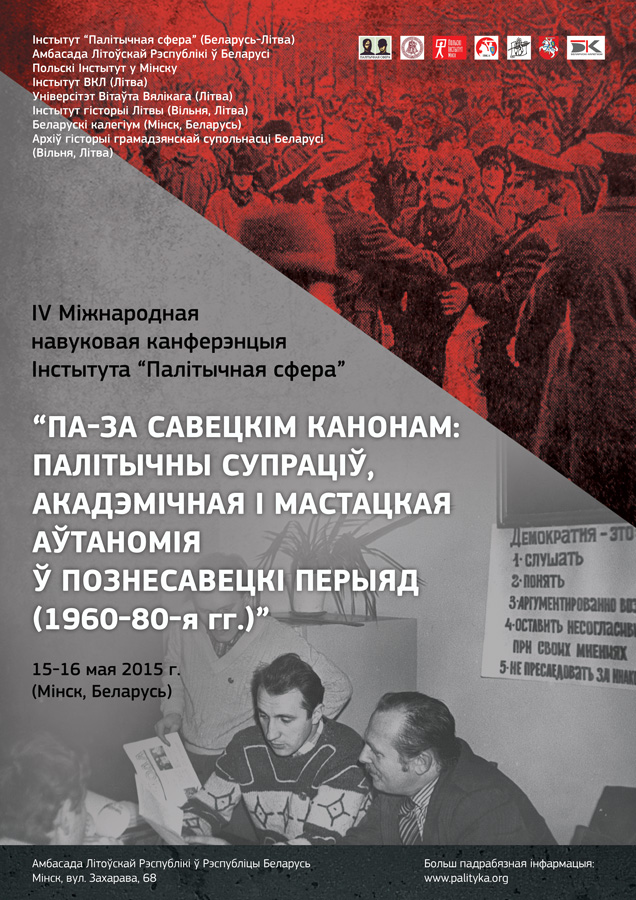 On 15-16 May 2015 the Fourth International Conference of the Political Sphere Institute “Beyond the Soviet Canon: Political Resistance, Academic and Artistic Autonomy in the Late Soviet Period (1960s–1980s)” will take place in Minsk.

The conference will gather around 40 academics from Belarus and other countries of the region– Poland, Lithuania, Ukraine, Russia, Sweden.

Programme of the conference.

At the conference we would like to scrutinize those aspects of civil and intellectual life, which existed beyond the strictly set socialist canon of thought and action. This includes not only dissident and non-conformist movements, but also the demands of the academic and artistic intelligentsia, attempts of transcending the regulations, emphasizing national problems beyond the allowed “ethnography”. Thus understood, the USSR collapse seems to be not a geopolitical disaster, but rather a surfacing of autonomist and decentralization tendencies, and their realization in the favourable environment of economic and political crisis.

The conference will include two public discussions: “Were There Any Dissidents in Belarus?” (15 May, 18.30, Ў gallery) and“Did National and Cultural Movements of the 1980s Contribute to the Emergence of Independent Belarus?” (16 May, 14.00, Ў gallery). The discussions are free to attend.

If you want to participate in the work of conference sections as a guest, please register at our website.