“Have the National and Cultural Movements of the 1980s Influenced the Formation of the Independent Belarus?”: discussion on May 16 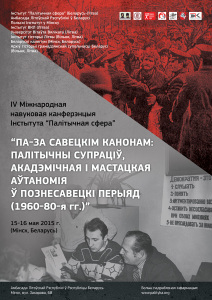 On May 16, Belarusian Collegium invites for discussion “Have the National and Cultural Movements of the 1980s Influenced the Formation of the Independent Belarus?”

The 4th Minsk international symposium “Beyond the Soviet Canon: Political Resistance, Academic and Artistic Autonomy during the Late Soviet Period (1960s-1980s)” arranged by the “Political Sphere” Institute will serve a platform for debate on the influence of the national and cultural movements of the 1980s on the formation of an independent discussion.

The Soviet Union disintegration is normally associated with the national system crisis and the loss of monopoly control over the political and social processes by the Communist party. But no doubt that social movements played a significant role in that process promoting the national and cultural requirements. The debate aims to discuss the way we can currently identify the place of such initiatives in the formation of the independent Belarus.