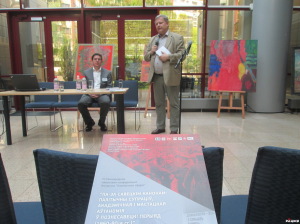 International symposium “Beyond the Soviet Canon: Political Resistance, Academic and Artistic Autonomy during the Late Soviet Period (1960s-1980s)” was held in Minsk on 15-16 May, 2015.

The event was initiated by the “Political Sphere” Institute. The very problematics of political dissidence and the study of the social phenomena that go beyond the bounds of the strict regulations of the communist regime remains poorly developed in Belarus. Therefore the symposium’s aim was not only to set up a research forum but also to bring this problematics back to the focus of scientific and social attention. About 30 researchers from Belarus as well as from other former socialist camp countries (Poland, Lithuania, Ukraine, Russia) took part in the symposium. During the discussion, a lot of attention was paid to the comparative perspective, the possibilities to compare the processes that took place in different national contexts. One of the most important issues was defining the conceptual apparatus and specifying the categories in use (“nonconformism”, “dissidence”).

Apart from that, the symposium hosted two public discussions: “Have There Been Any Dissidents in Belarus?” (May 15), and “Have the National and Cultural Movements of the 1980s Influenced the Formation of the Independent Belarus” (May 16). In contract to the academic format of the symposium, the discussions were focused on the combination of the scientific interpretation with the personal reflections of the participants of the dissident, national and cultural movements.